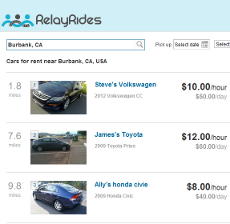 Peer-to-peer car rental services, like RelayRides, are gaining quite a bit of attention but an attorney specializing in asset protection planning says they can also present a serious risk to your financial well-being.

RelayRides went nationwide in March this year after launching in Boston in 2010. Many participants loan their cars as a good deed to open up parking along busy urban streets, promote environmentally sound habits or simply to help those in need of a ride. Most, however, opt to rent their vehicles for a variable rate – usually about $10 per hour.

“Every car loaned or rented through the program gets $1 million in liability insurance coverage from RelayRides, but even that may not be enough,” says attorney Hillel L. Presser.

“When there’s an accident involving serious injuries, the victims simply have no choice but to sue for at least $1 million, and often more. If you rented the car and you have assets, you could become a target.”

Earlier this year, a man who rented a car through the program was killed in an accident while driving the wrong way on a highway, Presser says, citing a New York Times report. Four people in the car he hit were seriously injured.

“Medical expenses are expected to exceed RelayRides’ insurance coverage,” Presser says. “The owner of the car is a part-time Google systems administrator – which means she probably makes good money. Who will pay the overage, and who might be sued, is still yet to be determined.”

In today’s world, lawyers have gotten very creative in what they’ll go after, which is why comprehensive protection of assets is absolutely crucial, he says.

While it's fine to complain about lawyers, the harsh truth is that $1 million is not very much money if one or more victims of an accident are severely injured and face years of costly care and reduced earning capacity. Lawsuits in such cases often produce awards of many millions of dollars.

Presser doesn't just talk about such disasters, he's written a book about them, called Financial Self-Defense.

He offers these tips: